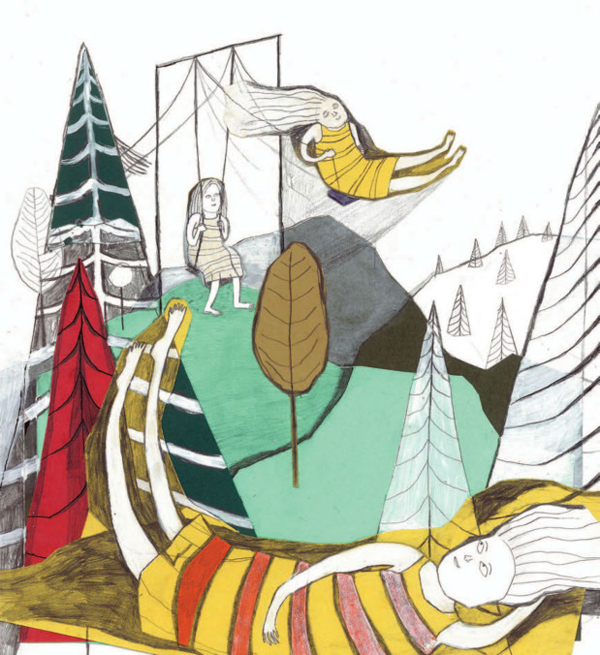 Hi Steef! In 2012 you graduated from the academy of arts (Bachelor of Design) in Zwolle. How was your time there? Based on what work were you admitted?

The academy of arts felt like home. During high school I was a slow student and I rarely enjoyed studying. But at the academy, when it came to subjects like history of arts, I was able to remember every small detail. As soon as we got our own studio I practically lived at the academy. I mostly worked there till half past 9 p.m. when the janitors had to kick me out. Before I got admitted I mostly drew traditional cartoons. I didn’t have any specific inspirations. My drawings were loosely based on cartoons I watched and videogames I played. Because I enjoyed drawing that much, illustration was the most logic step to take. But I also developed an interest in animation and fine art. At the academy, I was forced to think outside of the box. I really learned a lot because of that whole process. It gave me a lot of new energy and inspiration. 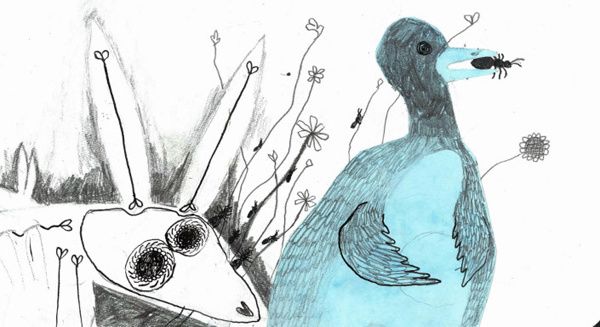 After your graduation you won the ‘Boekeboekie Start Award’ and you also finished 6th in the ‘Benelux Beeldverhalen Prijs’. That sounds like a promising start to your career as an illustrator. Did you get any commissions out of that and how is your work going at the moment?

I’m still working for Boekieboekie on a regular basis. Also, I’m currently working on a new comic commissioned by the people who organized the ‘Benelux Beeldverhalen Prijs’. Earning these titles while still studying at the academy certainly helps to promote yourself as a ‘real’ illustrator. The academy of arts is like a little world of its own. Earning recognition outside of these borders felt like a big deal to me. Aside from those projects, I’m working with two other illustrators on a comic book based on the life of Mozart. But for the most part I’m working on personal work, like illustrations and short comics. 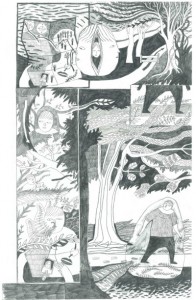 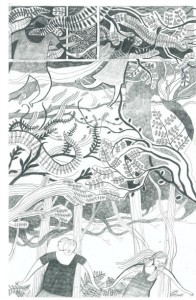 You predominately work with pencils and your use of color is bright and mostly without overlap. Aside from that you work a lot with squares and lines. Your work is clearly handmade. How did this method come about and how did your style change over the years?

My style changed a lot during the years. The first few years at the academy I found out I enjoyed drawing without a premeditate design, depending on intuition and play. The techniques I used changed from time to time. For instance, I had this cloth-phase in which I used old cotton sheets as my canvas, creating art-brut-like figures. After that phase, I tried something else. You could say I was offended by the idea of sticking to one style for the rest of my illustrating life. Of course, developing one’s own esthetics and method turned out to be inevitable. Pencils grew on me because of their fine touch and the quality of erasing and shapeshifting the lines and objects, leaving behind some smudges and traces of my thought-process. I’ve never really been much of a painter, so I started working with collage-techniques whenever I felt color was needed. Later on I started using ecoline to create fine lines of color. 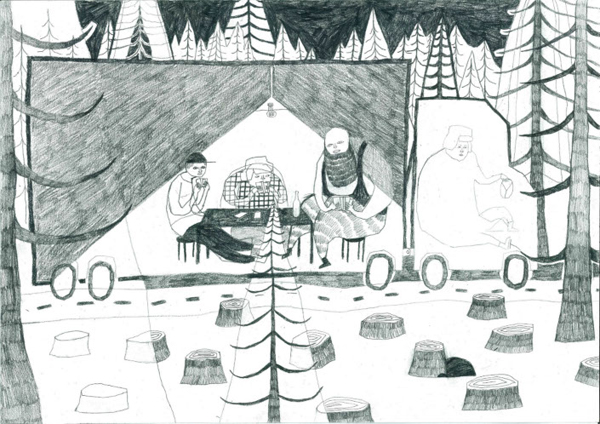 Any particular themes/subjects that you prefer or that re-occur throughout your work?

Well, first of all, I’m not much of a talker. Neither as a person, nor in my work. I prefer to talk without using words. Speaking and writing just feels unnatural to me. It would be rare for me to create a comic using a significant amount of text. I consider this one of my main motives; talking through imagery. It’s my primary language. I like telling intimate stories. Preferably sad ones. I suppose I believe the stories that evoke a form of melancholia are the more interesting or important ones. Trying to tell feel-good stories just feels unnatural and fake. Which doesn’t mean I don’t use any form of humor in my work. You can’t be sad or serious all the time. My stories also tend to be quite ‘small’ and feel like they take place in a compressed length of time. I like to focus on the details. Moving slowly. Telling tales that could be summarized within a short sentence, but can also be prolonged to an 8-page comic. Like someone opening a can of soup for instance.

You created a lot of comics, including ‘4 truckers’ and ‘leaf’ , can you tell us more about them? Are comics one of your main ambitions? How do you go about creating a comic?

I must admit I’m quite proud of those comics. At the time I was mainly focusing on illustration and animation. I stopped drawing comics long ago because it felt really ‘stiff’ to me, focusing on frames, character models and cinematic angles. It demanded a very different aspect of storytelling. I felt highly restricted by the medium. At the start of my final year at the academy I felt my illustrations were mainly based on atmosphere and lacked on narratives. So I tried teaching myself by drawing comics again. At that time, my drawings mostly grew organically during the process of making them. This comic was no exception. I started out with a setting, title and a few sketches. Making comics stopped being a restriction. Instead it gave me new means to tell a story. I consider those pages still partly illustration, based on composition and esthetics. And yes, I plan to keep making comics. I’m working on two different stories as we speak. One of them is still very much a work in progress. The other one is a comic about Mozart and will be published as a collaboration with Chiel te Bokkel and Gert-Jan Oosting. 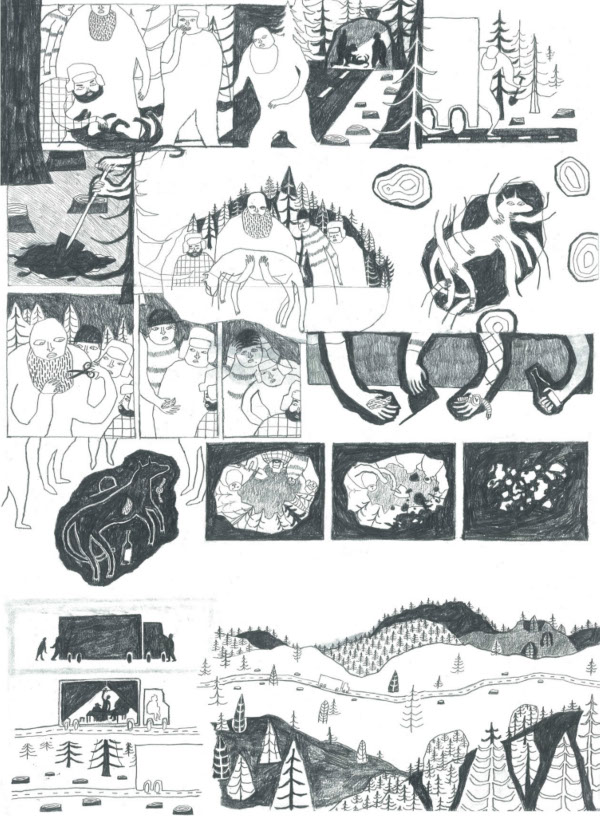 Do you have a certain goal that you work towards or do you take it one commission at a time?

Not a goal, really. I’m mostly focused on drawing as often as I can.

Who or a what are your sources of inspiration?

Ancient murals, tribal art and hieroglyphs inspired me a lot. The way objects, people and animals are displayed to tell a story. A lot of them are in fact playful predated comic books. I use a lot of esthetics and narrative techniques from them in my work. I’ve also been inspired by the drawings of Jean Dubuffet, CoBrA and outsider art. As for movies, I think the one that inspired me the most is The Good The Bad and the Ugly by Sergio Leone. I like the extreme close-ups and cinematography. The story is very simple, but told perfectly. I also enjoy the work of Michel Gondry. I’m not sure if I would consider music a direct inspiration, but I do work while listening to music most of the times. You’d hear me listening to Radiohead, The Doors, Múm, Talking Heads and many others. 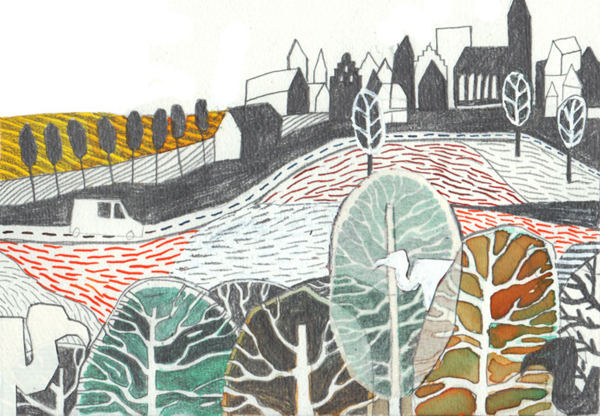 If you were to choose a commission for yourself right now, what type of commission would that be?

Well, all those possibilities and I can pick only one? For some strange reason I’d love to illustrate and design a tombstone. Giving meaning to someone’s life-monument just sounds like the most significant task for one to carry out. Don’t ask, it’s the romantic in me I guess. 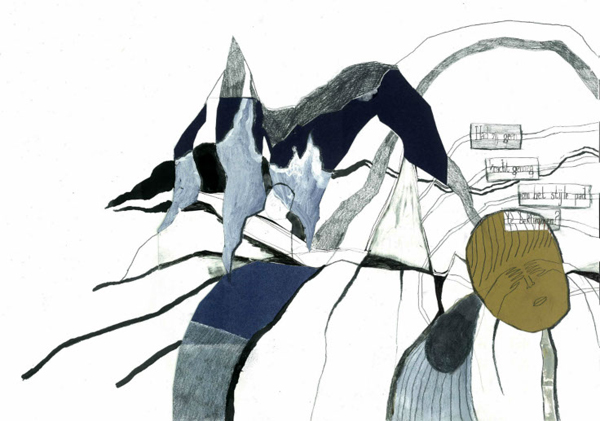 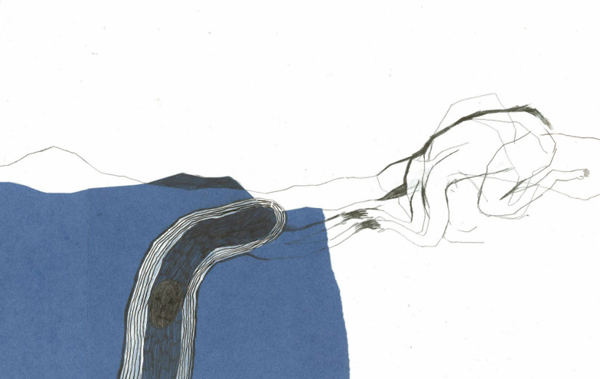 For The American Soundtrack you created an illustration about the state of Utah. Can you tell us more about why you chose this and about your actual piece?

In my work I’ve drawn many landscapes. Mostly nature or locations with a sense of solitude. In the Netherlands there’s hardly any nature left. Yes, there are forests and meadows to be found but nothing compared to America. Not only by size but also by our definition of nature. Everything in Holland has been touched by human hands. And you will always find a person living nearby. We are never alone. In the Netherlands there are about 448 people per kilometer square. For comparison, in the United States, that’s about 33. To me that’s mindboggling. Especially when you consider America the same place where you will find a metropolis like New York or Los Angeles. Having never been across the Atlantic Ocean I can only talk about my expectations about the American wastelands. The most alienating and beautiful landscape to me would probably be the American desert. And when I think of American deserts I think of Utah. Whenever I illustrate a location or topic I’m not familiar with I’ll ask my dear friend Google for help. When searching for ‘Utah’, there’s only one recurring picture: The famous rock-pillar called the Delicate Arch. It’s considered the symbol of Utah. I decided taking this image as my motive. Hoping it would be recognized by the viewer. And furthermore adjusting it into a more alienating landscape. I imagine the place as something surreal, almost religious. I tried capturing this expectation of me. 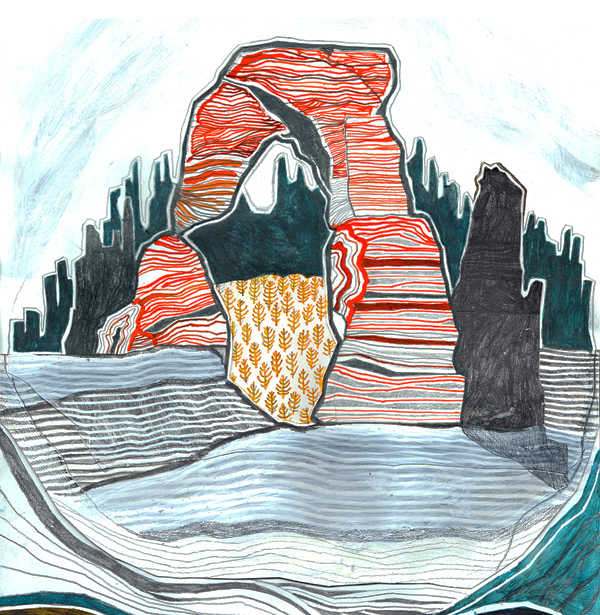 Thank you for your wonderful contribution to The American Soundtrack and for taking the time to do this interview.

You can see more of Steef Wildenbeest’s work on the following websites: