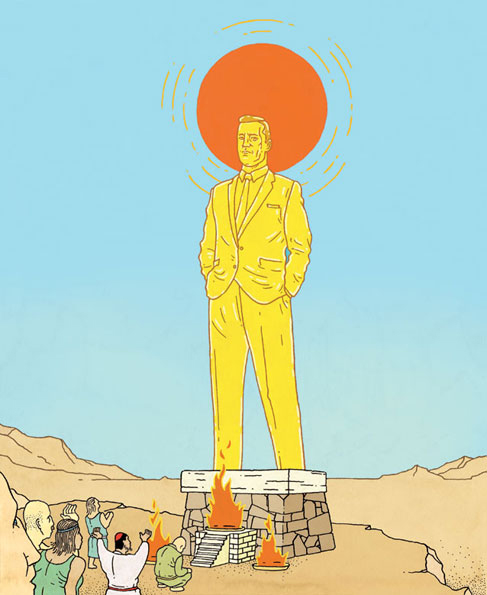 You illustrate for the NY times; as a Dutchman, how did you get that gig?

A while ago a selection of my short TRI/P comics was featured on “It’s Nice That”, a website dedicated to art and artists. It was spotted there by The New York Times’ deputy art director, who then approached me to do an illustration. So I was in the lucky position where I was asked to do this, a chance I was and am extremely happy with. The moment that I opened my mailbox and saw that NY Times email is probably in my top 3 moments of 2012.

Your illustrations in the NY times Magazine appear alongside pieces by Adam Davidson. Are you in contact with him about this? If so, how does collaboration like that work? How do you communicate in general with the NY times or with Bloomberg?

I have never actually spoken with Adam Davidson, or any of the others writers for whom I illustrate, for that matter. It’s always a dialogue between me and the art director. When he gives me an assignment, I respond, with some quick suggestions on how to approach the subject. Then I have a whole day to do sketches so I try to come up with as many ideas as possible. After I send the sketches he replies with his choice of a sketch, a request to come up with more ideas, or a different idea he came up with himself.
For Bloomberg it’s slightly different because the deadline is very tight, it’s a very intense collaboration where I only have a few hours to come up with ideas and sketches. They pick one, and sometimes ask for minor alterations, and then I have a few more hours to finish the whole thing. 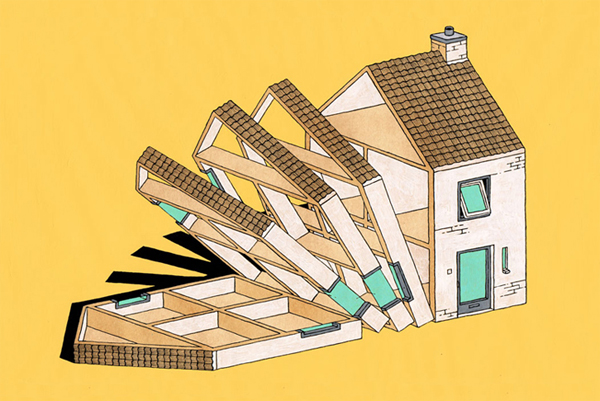 Your editorial illustrations are dependent on the ideas of others, and you don’t get to pick the subjects. How do you go about this? What does the process look like? Does it differ from your own work?

This is the thing I love about editorial illustration, the wide range of subjects pushes you as an artist. Sometimes it can feel like there’s no possible way to make something good because, for example, the article is about something really abstract. I’ve recently done a lot of illustrations which were in some way or another about the American economy. This can be really difficult because not all aspects of the economy have a good “visual” side to them. So you have to come up with metaphors that say something about the subject you are trying to convey while not getting too vague or obscure.
With my own drawings and comics this is much easier because I control every aspect and I do not have a deadline so when I fail to get it right I just start over.

On the back of that; how important is it for you to be update with current affairs, both domestic and intentional? Or is the story that you are illustrating your focus, and context becomes secondary?

This is difficult for me to answer because it’s probably something that plays a role but isn’t immediately clear. And mostly it’s not really the context of the news and what goes on in the world but it’s the cultural context in combination with the information in the article I’m asked to illustrate. For instance I was asked to do an illustration about high quality wine coming from the state of New Jersey and the difficulty in marketing it because of existing stereotypes about New Jersey and the people who live there. Because the article is mainly for an American audience it didn’t specifically explain these stereotypes. Americans know about them so the article didn’t have to explain them. So then it’s a good thing to know about stuff like The Sopranos, and Jersey Shore because it provides context and makes it easier to come up with a good idea. 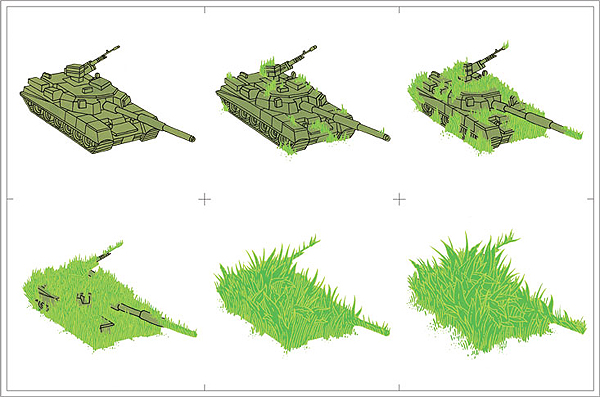 I noticed you like to watch The Colbert Show and The Daily Show on Comedy Central. Are these shows a source of inspiration for your work about America?

Not really, American culture fascinates me, and I love The Daily Show and Stephen Colbert but they are just a small part of that culture. But like I said in my previous answer, sometimes it makes it easier to understand the context and situation surrounding some articles or subjects. I guess it does provide some sort of frame of reference from time to time.

Is America a place you would like to build a name for yourself?

Absolutely. I’m really glad I’ve been given the opportunity to do illustration for American clients, especially so early in my career. 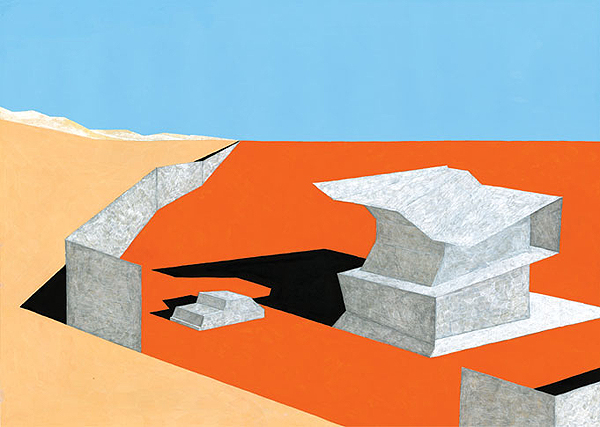 Your style has overlaps with comics and graphic art. Your choice of colours is bright, strong and clear. Your lines are crisp. How did you come to this style? And how did you develop your drawing skills over the last few years?

It’s just something that happened. I’ve experimented with a lot with different drawing styles, working really fast and quick, using collage techniques and working with different textures and materials. From all that, I kept the things I really liked until I ended up with the way I work now. It’s still an ongoing process, I still look for new ways to draw and ways to refine my style of drawing. 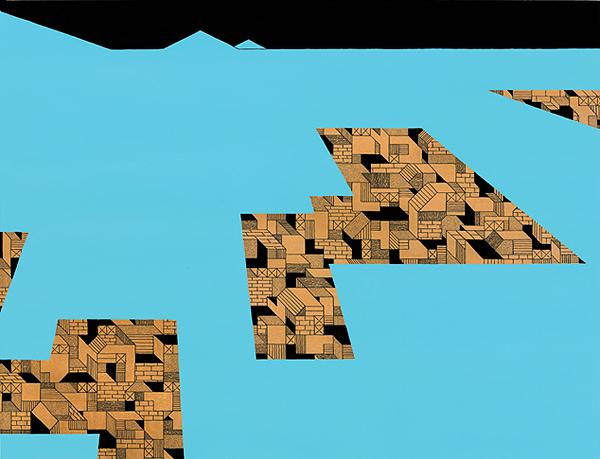 Your Tri/P series have been around for a number of years now, and you have created over a 100. How did you come up with the idea for the series, and how do you keep it fresh and challenging for yourself?

TRI/P started with a series of illustrations I did where I tried to tell a story within a single drawing. The idea was that the viewer could then fantasize about what had happened “before” and “after” the drawing. One of my teachers at the time said why not actually draw that yourself and make it into short stories.

TRI/P has been really important for me, it’s the perfect way to express what I love about comics and illustration. I love how it allows you as an artist to tell a story or convey an idea using only images. It’s a lot of fun to come up with an idea or a really basic story line and try to cram it into three panels without it losing its clarity. So whenever I have an idea for something new, the first step is to see if it would work as a TRI/P.

You would like to publish a book; do you have any definitive plans around that? Would you, for example, like to work on creating a longer story? Would you write that by yourself or do you plan on a collaboration?

Right now the comics side of what I do is TRI/P, I hope to find a publisher who is willing to take the risk and make it into an actual book. The way I look at it is, why publish a book containing a single story when you can publish a book containing more than a 100 stories! The perfect deal for any publisher, right? Still, it would be nice to work on an actual graphic novel. It’s something that I’m interested in but as of right now I haven’t come up with an idea that I like enough to spend a few years working on. Also, I think it would have to be something I’d do completely by myself, which is kind of a scary prospect.

Do you have certain goals or ambitions that you are working towards with your drawings and illustrations?

The publishing of TRI/P is probably my number one dream right now, as an illustrator I’m working with amazing clients and I love it, but having my own work published and read by people would be fantastic as well.

Who are your role models or sources of inspiration?

I’m influenced by many things, ranging from movies and tv series to comics, art video games and everyday life. I guess the only thing I’m not really directly influenced and inspired by is music, although I listen to music all the time while working. I have a special interest in short stories.
Some names of artists I really like are: Charles Burns, Joost Swarte, Bruce Mccall, Tim Enthoven, Moebius, David Lynch, David Cronenberg, Stanley Kubrick, Hayao Miyazaki, Roald Dahl.

Let me finish up by thanking you for your contribution to The American Soundtrack. You created this wonderful illustration themed ‘America’. 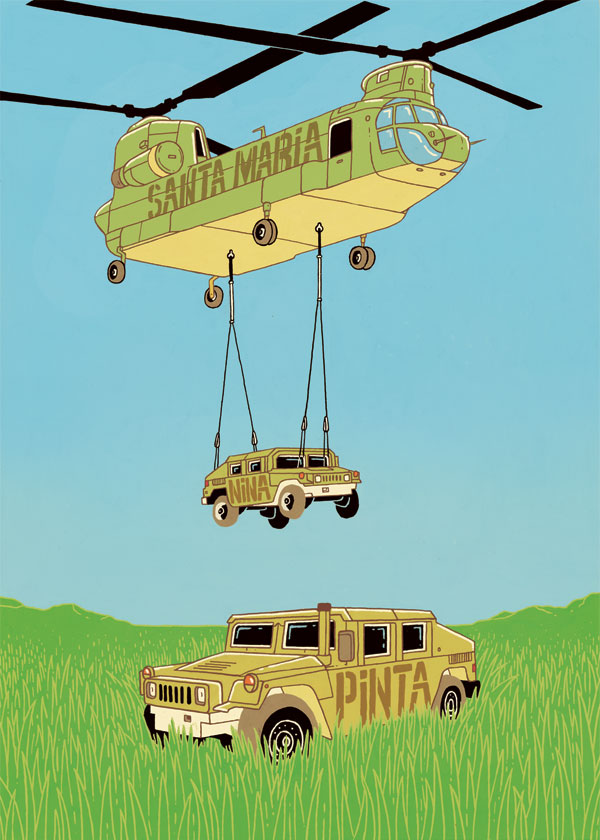 Thank you for taking the time to do this interview and for your lovely illustration!

You can see more of Jasper Rietman’s work on the following websites: