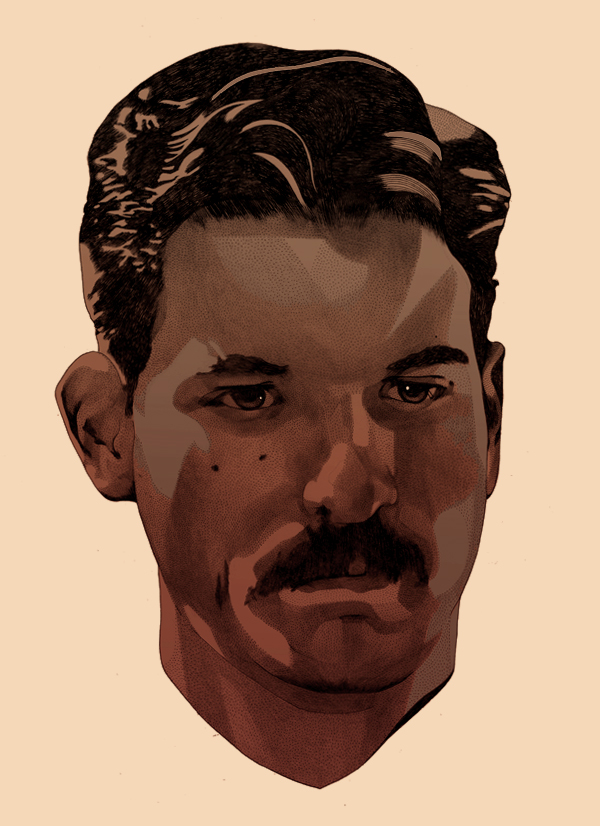 A couple of years ago, while playing at the Hollywood Farmer’s Market,you caught the attention of musician Matt Popieluch from the bands Fool’s Gold and Foreign Born. He became your manager and helped you get gigs. You ended up being the support act for Fleet Foxes in 2008. How have things changed for you since then? Would you say there’s a big difference between playing on the streets or playing a venue?

Well, that’s how I began making a living playing music.  I first started to play music out on the streets – that’s where I learned to play music for other people.  I learned a lot from playing on the streets, but some of the things I learned I’ve had to slowly unlearn (I feel that with music, as with everything really, it’s just as important what you learn as what you don’t).  Busking, I learned to always be loud and hysterical and to depend on putting on a character.  I hope that I’ve come some way in letting go of those habits.  That’s the difference between playing on the streets as opposed to a venue.  Ideally in a venue you don’t always have to play louder and faster to connect with someone, you can play with subtlety. Many outdoor festivals on the other hand can in my opinion be even more chaotic than a street corner, and I often feel that I have no other resort than “louder, faster”.

You’re a big collector of 78pm records and collect all kinds of music. What are you trying to find in the records you collect? And on what basis do you select them or collect them? Has the tradition of recording songs inspired you to do recordings yourself? What are some of your favorite records in your collection?

I’m not a big collector at all, I’m very much a small time collector – whenever there’s money, which is seldom.  I know a lot of the big collectors and I’m certain that I could never – even in two lifetimes – amass a collection like that of Chris Strachwitz, Richard Nevins… those are some of the big collectors.  I seek out whatever tickles my fancy; whatever I think is good music.  I don’t really care very much for recording music myself, I consider that a bit of a chore.  I mostly strive to have a well rounded collection; to have at least a few examples of all of the types of music I’m interested in.  I’m not much for favorites and I have a lot of interests but some of my greatest interests are Tejano (Spanish Texan) fiddlers, Anglo-American fiddlers from the West, the Midwest and New England: Santiago Morales, Bernard Cartwright, William Houchens, Jasper Bisbee…

On your latest record ‘Out On The Open West’ is an original song called ‘Poor Old Lance’. How did that song come about? Could you maybe share the lyrics?

That song is about an old friend of mine named Lance who lived in a hobo jungle in the Angeles Crest Forest.  I would meet him at night in the alleys, drink cheap gin, and play the fiddle for him and he would tell me stories.  I learned a lot from him… I’m sure I wouldn’t be playing music for a living were it not for him.  One night he robbed a man on Mather Street and was arrested.  I was with him when he got caught and played the fiddle for him as the police took him away.  He told me he’d be right back but I knew I’d never see him again and I never did.  The words say:

*Poor old Lance ain’t on the road no more, they’ve got him sleeping on the  jail house floor.*
*They took shoes, they took his belt, they locked him up, how bad I felt.*
*He robbed a man out on Mather Street.  You ought to see that drunkard flying on his feet.*
*A police officer caught up to him, saying “Old Lance, what a mess you’re  in.”*
*The police officer carried him away. He locked him up until the second day.*
*He took him up to the judge’s stand, to await his trail by the law’s command.*
*He knew that judge so many times, for robbing and drinking – such awful crimes.*
*The judge he said, “Well it ain’t no use, it’ll be ten years before we turn you loose.”*
*Old Lance told me before they took him and gone, “Don’t worry son, I surely won’t be long.”*
*He looked on as he’d never done before – old Lance won’t be on the road no more.*

A lot of the songs you play have been written a long time ago and have been played or interpreted by many musicians/artists. Many songs that went from generation to generation. Nowadays we often talk about covering songs and owning the rights or credits to a song. In some cases artists even get sued because of plagiarism. How do you feel about that when you think about your own music and your own approach to music?

Well, it is a very recent trend of legally owning a song, and even more recent a trend is the concept of owning the performance of a song… or even the desire to. Even during the height of “tin pan alley”, songwriters wrote songs for the masses to sing – that was the whole point.  To have a songwriter want no one but himself to sing his song is like having an author of novels want no one but himself to read his novels.  It’s absurd.  This trend in the so called “music industry” came about solely to keep lawyers in business.  I just like to play common music… popular music.

Have you ever been asked to do a soundtrack for a movie? Can you name some of your favorite movies?

I’ve never been asked to play on a soundtrack for a movie *per se*.  I don’t really watch too many movies and I don’t have too strong of an opinion about them… I don’t have enough knowledge on the subject to warrant an opinion.

What songs have been on your mind lately?

I haven’t had too many songs on my mind lately… I don’t know what’s on my mind.

If you had the chance to put together a list of songs that would serve as a soundtrack to your life, what songs would definitely make the list?

To me a song is just a means to an end.  I don’t really care that much about any one particular song… apart from Sally Goodin of course.

Are you working on a new record right now? If so, will that be a collection of your own songs or will it be a mixture of ‘old’ and new?

I don’t really *work* on anything, especially not music.  I will probably record something pretty soon though, I suppose it will be “a mixture of ‘old’ and new”, you get there just the same though.

Thank you for taking the time to do this interview.

For more information about Frank Fairfield and his wonderful music, be sure to visit one of these sites:

Below you can find the first black and white drawings made for ‘The American Soundtrack’. These drawings were made on A4-paper with a Sakura…