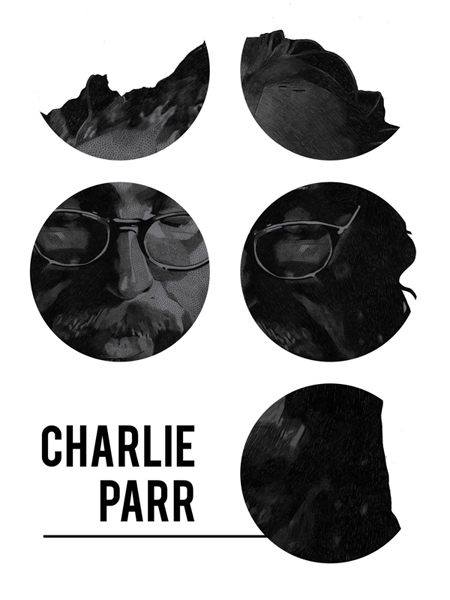 You have a new record out called Barnswallow. Can you tell us a little about the making of the record and the selection of songs?

The record was recorded in a single day in a church in Winona Minnesota with a couple friends of mine (Dave Hundrieser: harmonica, guitar, mandolin, jaw-harp and Mikkel Beckmen: washboard, percussion). The songs were written in the last 3 years and cover the usual topics that I seem to gravitate towards; death, god, grief, cars.

In previous interviews you’ve talked about artists like Mance Lipscomb, Lightnin’ Hopkins and Albert Kind and their influence on your guitar playing. Are there any artists in particular that inspire you lyrically or vocally? Which artists do you love to listen to because of their voice and way of singing?

Well, the 3 you named are definitely influences on my singing. I also really like Bukka White and Robert Pete Williams for their singing as well as their guitar playing. Woody Guthrie is someone that I listen to a lot in terms of singing and phrasing and stuff like that. I wish I could sing better, it’s not for a lack of trying, I’d love to be able to sing like Johnny Cash or Merle Haggard.

If you had the chance to put together a list of songs that would serve as a soundtrack to your life, what songs would definitely make the list?

Woody Guthrie – So Long, It’s Been Good To Know Yuh

Before you started a career in music you went to college and got your degree in philosophy. Would you say that getting a degree in philosophy influenced your songwriting or the way you approach certain themes or subjects? Any philosophers in particular that you like?

I was a horrible student, I dropped out of high school and spent most of my time at college trying to catch up and not quite getting there. After about 7 or 8 years I managed to get a BA which I’ve not used. I read Kierkegaard, Schopenhauer, and Wittgenstein mostly, but was not focused and came away more confused than ever. I think that everything that I’ve done or seen or heard influences my writing and I end up with a lot of threads that include a mash-up of philosophers/philosophy/theology/advice from my Dad/advice from my Mom/advice from homeless Vietnam veterans/bits and pieces of songs and stories from others like Robert Pete Williams, Bukka White, Jack Rose, Gabe Carter/observations from my kids/observations from my dog/conversations with the mailman/conversations with the guy who fixed my furnace/Barry Hannah stories/Raymond Carver stories/interactions at the hardware store/interactions at a truck stop 500 miles from my house … but that’s just folk music, and it’s just being a person, we are balls of our stuff all mashed together and we can’t help it, but out of that we can create empathy and understanding and art gets created at that point because we can start to kind of get the world a little bit. At least that’s what I got from being a failed philosophy student.

How do you challenge yourself in your songwriting and your guitar playing?

I’m always trying to learn new songs, and aging is it’s own challenge when your trying to maintain the speed and accuracy you had when you were 25 and you can’t. So now I learn new techniques to deal with arthritis and tendonitis and depression and all that. Songwriting is different, the songs come along, and I write them down. When they don’t come, I wait for them.

For your tours you do a lot of the driving yourself. I can imagine you get to see a lot of beautiful places, revisit old friends, and meet new people along the way. Are there any places or experiences you’ve had that hold a special meaning to you? What are some of the most beautiful places you’ve been?

I’ve been very very lucky to have seen many wonderful places and a good deal of the world so far. My home in Duluth is my favorite, I really love Lake Superior and the forests up here. I also love Montana, and the plains of North Dakota. The Blue Mountains in Australia are great, and I love Scotland and the Irish mid-lands. All the people I’ve gotten to know along the way are special, and it makes the world seem a little smaller having friends along the way.

You wrote the song 1922 Blues for your father, a personal hero of yours. Can you tell us a little bit about your upbringing and the role your parents play/played in your life? Now that you are father yourself, father of a boy and a girl, I’m curious to know if there are similarities in the way you were raised and the way you raise your own kids? Are you able to share the same kind of love for music for example?

We listen to music in my house most of the time. That’s the way I came up, too, and it felt right. Mom and Dad were laborers and I learned from early on that people are more important than their position. I hope that I’m the same way as my Dad, but it’s a pretty high mark, I think. He was kind, funny, strong and never let me down.

I like documentaries, and a lot of local artists. I’ve been lucky enough to have local artists help me out with artwork for the album covers, posters and such as that. It’s like folk music, it feels more accessible when it’s a guy down the street who’s painting the picture, or playing the guitar, writing the book, planting trees, driving cab, it’s all life.

For the people who are new to your music, what would be a good place to start?

I feel like Barnswallow is the best thing I’ve done and represents what I do really well. The best place to start is either there or by listening to Spider John Koerner …

Thank you for taking the time to do this interview.

For more information about Charlie Parr and his wonderful music, be sure to visit one of these sites: